I am a huge fan of Quebec, Canada, but had never been to Montreal. Quebec is one of the few cities that I choose to return to over and over. You can read about my Quebec trip here. One of my besties had never been to Canada, so last summer we did a road trip to Canada’s other large French-speaking city– Montreal, with kids! Read about the road trip from Boston to Montreal here. With English spoken almost everywhere and a huge offering of things to do, it is a pretty ideal first foreign city for families. Read on for ideas of things to do with kids in Montreal. View of downtown from Kondiaronk Belvedere on Mont Royal

With a cobble-stoned French section, old port and Olympic stadium, there are so many things to do in Montreal with your family. We stayed for just 2 days, which was enough time to get a small taste of Montreal with kids. Here is what our two-day Montreal itinerary looked like.

Montreal is located on an island where the St. Lawrence and Ottawa Rivers meet. The city is quite large at 71.8 square miles, but many of the tourist attractions are concentrated around Old Montreal. This a good thing since it is pretty congested and had a lot of construction going on when I visited, exacerbating the problem.

There are enough museums and activities in the Space for Life to keep one busy for days, so this is where we decided to start. The stadium from the 1976 Olympics is still used for training athletes. This is where you park (it was $19 when we visited). We didn’t understand how far the walk would be to get to the botanical garden (about 15-20 minutes uphill). The signage about where things are is also confusing. 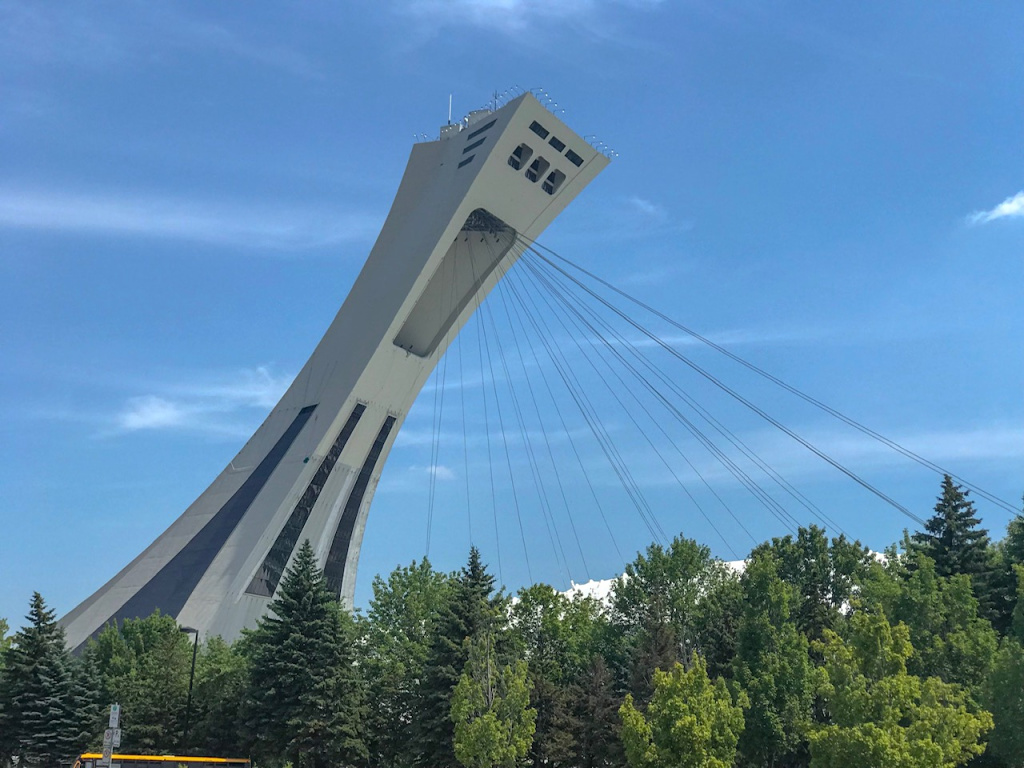 Take a ride up the tallest inclined tower in the world to look over the Olympic Stadium, St. Lawrence River and Montreal.

This was closed when we visited, but I have heard it is worth checking out. It will reopen in the summer of 2019. 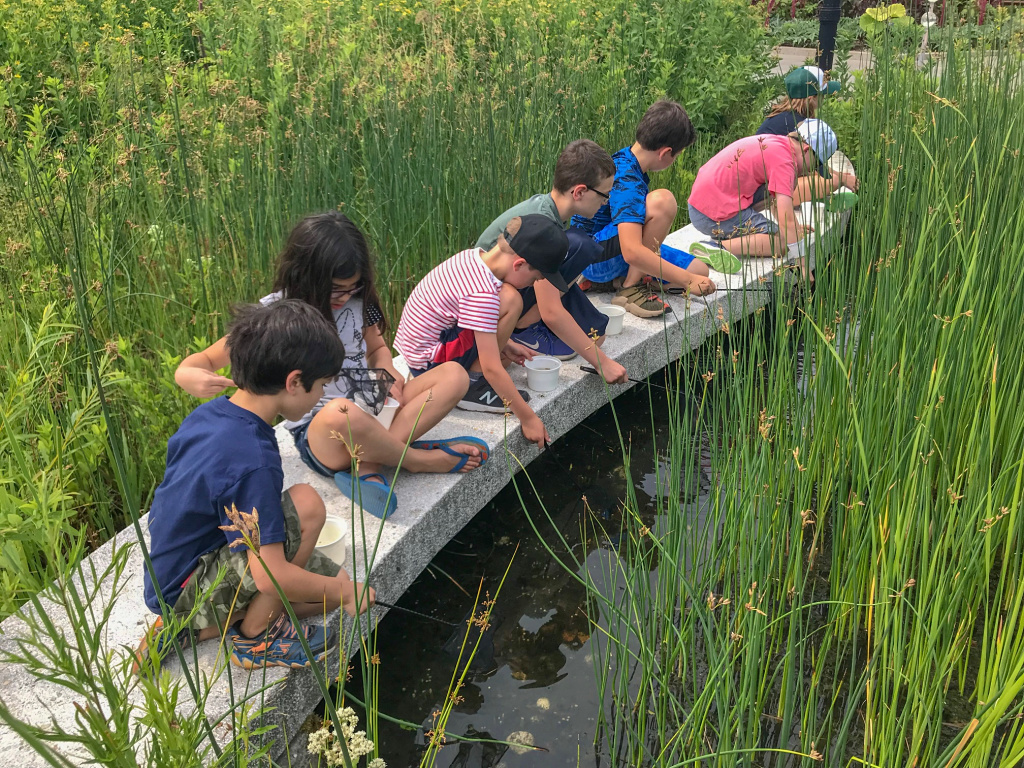 Our kids enjoyed the free activity in the Botanical Garden exploring which creatures are living underneath this pond’s waters.

I am always a fan of a garden and this one offers many activities for kids and adults. The thematic gardens will interest adults. The interactive gardens and scheduled kids’ activities will make the littles happy. There are a few restaurants here, so it is also a convenient spot to grab lunch. In the sensory garden, we explored the plants with our noses and fingers.

This museum of bugs, bugs and more bugs is inside the grounds of the botanical garden. Most of the insects are dead and behind glass, but there are terrariums around too. Entrance is included with your ticket to the Jardin Botanique.

Right behind the Insectarium is a playground. Right next to that is a delightful kiosk with really good soft serve ice cream… and some interesting toppings. If you dare, you can have yours topped with chocolate-covered termites!

Courtyard of the Senses 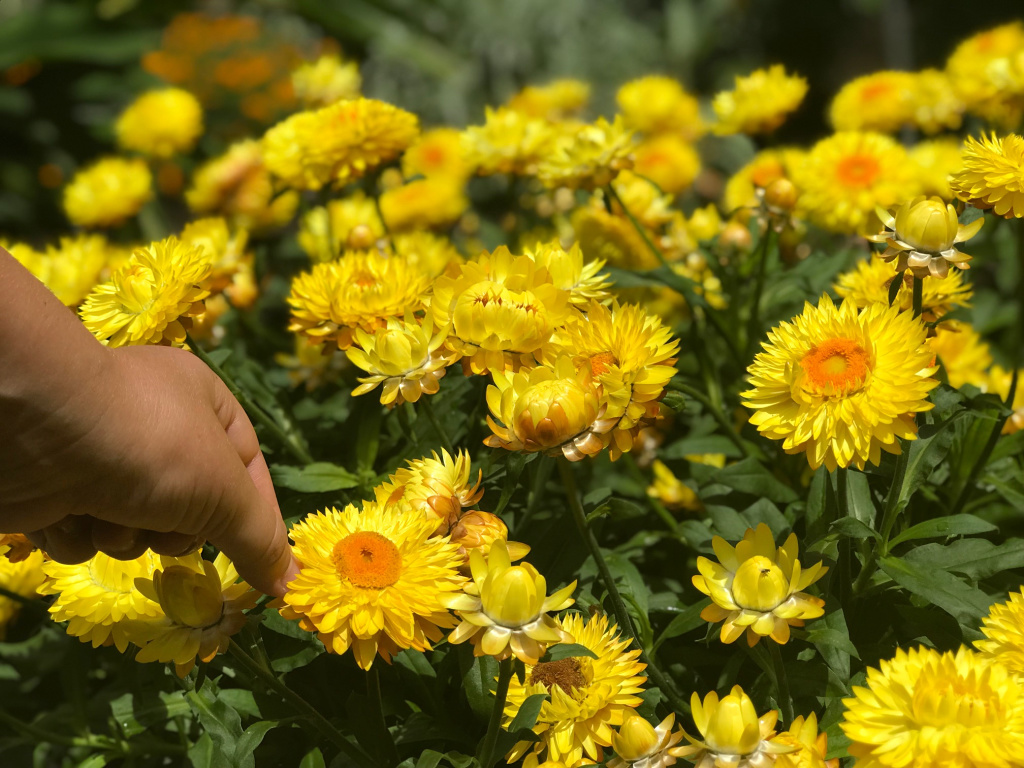 This was one of my favorite things we saw in Montreal. Admission is free, as it is right outside of the south gates of the Botanical Garden. This sensory garden is a touch, look and smell garden, meant for the visually impaired, but open to anyone. The docents are generally visually-impaired. 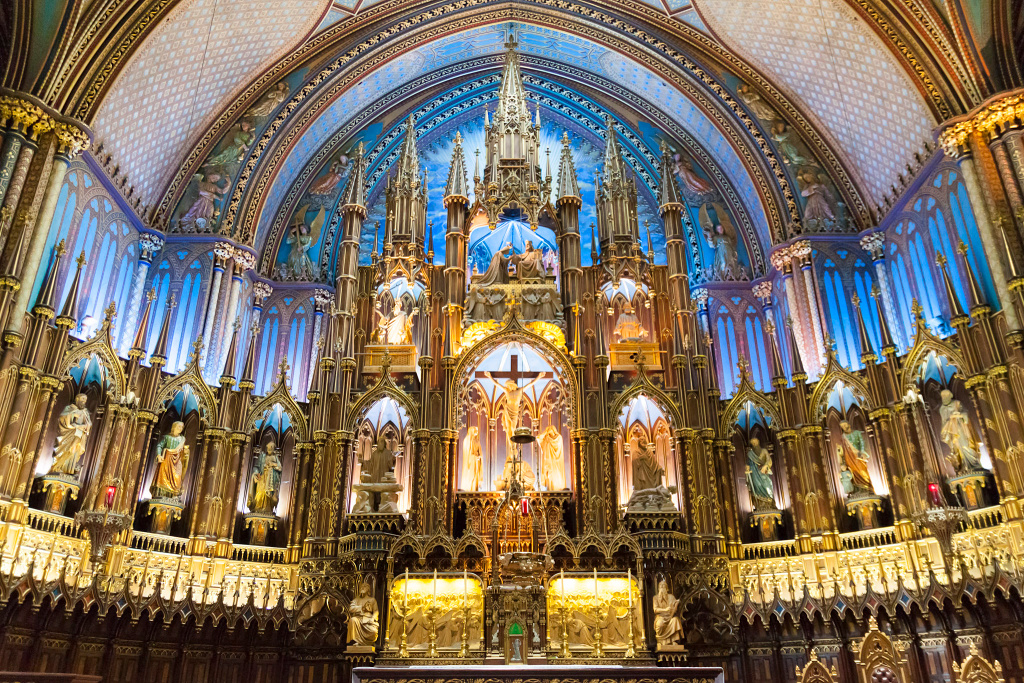 After our time at the Space for Life, we headed back into central Montreal to take in the Aura Light show in the Notre Dame Basilica.

Buy your tickets for this light show in this Gothic Revivial-style church completed in 1843.

Have dinner in Downtown Montreal

Montreal is named after this small mountain that looms over the city. At the top you will find a large park, Mont Royal Park. Within the park are hiking trails. You can take a short hike to Kondiaronk Belvedere, a semicircular plaza which contains the Mont Royal Chalet and provides a stunning lookout over downtown Montreal. The park has trails for mountain biking and cross-country skiing, a lake, picnic areas and toboggan runs. The original Royal Bank of Canada headquarters, built in 1928, is the home of the Crew Collective Cafe, which has some of the best bagels and coffee in town.

Explore the French influences, native Canadian foods and discover why Montrealers think they have the best bagels.

Under the Eaton Center is an underground mall, the perfect spot to visit on a day with bad weather.

Old Montreal was the spot of the original fur trading settlement in New France of the 1600s. Many buildings are still standing. You will have been in this neighborhood on day one, when you visited Notre Dame Basilica. On our second day, we concentrated our time in the section of Old Montreal right near the port. There are many stores and restaurants on St. Paul Street.

The old port on the St. Lawrence River now has kiosks, shopping, a spa and even a large Ferris wheel. Other than eating dinner nearby, we spent our time at the ropes course and watching fireworks. Kids will want to spend hours playing in the ropes course between the pirate ships on the Old Port.

My kids could have spent all day in this ropes course throughout pirate ships on the old port. Explore the course here.

Throughout the summer Montreal holds weekly firework competitions. People gather all over the city to watch the fireworks on most Saturday nights and a few Wednesdays. You can read more about where to view them here.

We watched the fireworks explode over the Champlain Bridge from the Clock Tower Quay which is right in the port. There were scores of people and you will be standing among the crowds, but it was a great view and we were very happy.

If you will be in Montreal for 3 days, it may be worth buying a Montreal Pass, which gets you into almost all museums, a boat ride and free public transportation.

Where to Stay in Montreal

We did not stay in the right place. We rented an apartment on the outskirts of the city because we were travelling with two families and it saved us some money. The place was not near the Metro and the traffic was so bad that each time we left the apartment it took us at least an hour to get anywhere– even though the place was within ten miles from everything.

Just look for a room that is in old town or downtown.

What to Eat in Montreal

We tried all of these things on our Montreal food tour. A Montreal bagel covered in lox and veggies from Crew Collective.

Visiting the Quebec Province is unique, in that one sees both aboriginal influences of the native Canadians and the influences of French settlers. The culinary result is Québécois cuisine and these are a few of the dishes we loved the most.

Beaver Tails are Canadian, not unique to Quebec, but they are ubiquitous here. They are long donuts (shaped like the tail of a cute little beaver) covered in your choice of syrupy sweet topping. Poutine is the Quebec slang for “the mess”. The mess simply consists of french fries covered in cheese curds and gravy. Many restaurants have contemporary takes on the mess, using sweet potatoes or even fancy additions, such as lobster.

Montreal bagels are boiled in honey water before baking. This results in a sweeter and smaller bagel with a bigger hole than other bagels in the world.

Pouding Chomeur ( Pudding of the Unemployed )

This simple pudding was created during the lean times of the Great Depression from simple items that the people had access to. The result is a buttery delight smothered in maple or caramel.

As you can see there is enough to see in Montreal to spend a lot of time there. I hope that you enjoy your trip to Montreal. Let me know in the comments if you have anything to add or any questions.

If you are heading elsewhere in Canada, read the rest of my Canada posts including 48 Hours in Niagara Falls with Kids. This error message is only visible to WordPress admins

Error: There is no connected account for the user 468725552 Feed will not update.