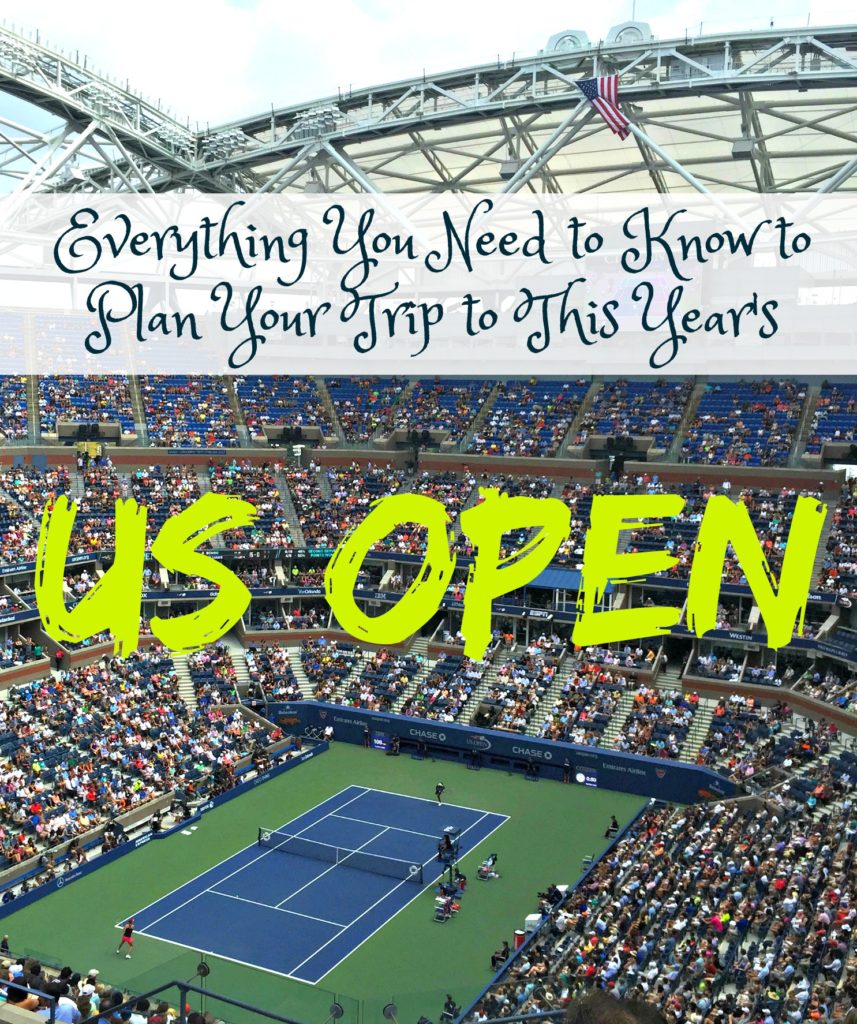 The US Open is the last of any year’s Grand Slam Tournaments in tennis. If you live near or are visiting the Northeast United States in the two weeks surrounding Labor Day and love tennis, seeing this tournament live is a must! Even if you aren’t near, it is worth planning a trip to see, so add it to your bucket list. In my eight years of going, I have seen pretty much every major tennis player play, most from just a few feet away. Read on to see my tips for getting the most out of your trip and plan your US Open experience.

Location of the Tournament

What is now the US Open began in Newport, Rhode Island, in 1881 but was soon moved to New York state. It was not referred to as the US Open until 1968.  Since 1978 it has been in its current location in the New York City borough of Queens in Flushing Meadow at the Billie Jean King National Tennis Center. The 1964 World’s Fair was held on the grounds. Queens is on Long Island across the East River from Manhattan.

The complex contains DecoTurf, a fast-moving acrylic, hard court surface, which makes for exciting serve and volley games. All the courts are lit. The main court is in Arthur Ashe Stadium. It seats 22,547 and is the largest outdoor tennis-only stadium in the world. The biggest games are played in this stadium, where a roof was installed in 2016.

There are also the reasonably large Grandstand Stadium and the Louis Armstrong Stadium with a retractable roof. Some of the best games I have seen have been in these smaller stadiums that offer some general seating and where, with patience and planning, you can be closer to these tennis all-stars. The Louis Armstrong Stadium general admission areas are generally shaded, a big plus for me. There are also many side courts where you can find great games. The Center also has numerous restaurants, stores, and vendor areas where you can have fun playing games or testing your serve.

Getting to the US Open from New York City

Car: Public transportation to the area is so good, but if you want to drive, parking is available. Expect traffic congestion.

Subway: The 7 Train from Grand Central is about a 25-minute ride right to the front of the stadium at the Mets-Willets Point Station. When I am in NYC, I use the New York Subway iPhone app, which makes finding the right subway very simple.

You can check out US Open’s Transportation page for further directions.

How does the Tournament Work?

The US Open is held over two weeks, with the field of competitors dwindling until the end when only two individuals or teams in each category stand to battle in a final match. There are five main categories of play: woman’s singles, women’s doubles, men’s singles, men’s doubles, and mixed doubles. During the tournament, you can also catch juniors and wheelchair tennis (on years when the Paralympics does not take place).  Check out the main schedule.

On which Date Should I Go?

As expected, the closer you get to the finals, the steeper the ticket prices get. Early on in the tournament, you can catch big players in challenge matches on the outer courts. I usually go on the first Friday (day 5 of play) because I like seeing the players play up close. By doing this, I have seen almost every highly ranked player over the last five years: the Williams sisters playing both doubles and singles, Nadal, Federer, Azarenka, Keys, the Bryan brothers, Djokovic, Wozniacki, Tsonga, Cilic, Querrey, Halep, Keys, Gauff, Osaka, Gauff, Alcaraz, and Rawdwanska among others.

Where Should I Sit?

As expected, tickets to Arthur Ashe stadium are the most expensive. Grounds tickets are also available early in the tournament. They allow you into the general admission areas and are a great way to see the games, even if you can’t afford to spend a lot. Sit on the south side of Arthur Ashe (around section 240) if you would like to avoid the sun for a more extended period.

Which Session Should I Attend?

You can purchase morning or evening session tickets. If you buy a morning ticket, you can enter the stadium at 10 am (or 11 am in the finals), and you are likely to see three games in Arthur Ashe Stadium.

You enter the grounds at 6 pm for the night games and expect to see two games. It seems to me that the more sought-after singles matches occur during the night sessions, but more of the grounds games are over, so you have fewer options outside of Arthur Ashe stadium. If you buy morning sessions, they don’t kick you off the grounds so that you can spend the evening in the general admission areas. I always purchase day sessions.

At the Open, you can buy almost any food you can imagine, from a lobster roll to chicken tikka masala. There are food kiosks in all the big stadiums as well as a large food court. Most people eat in the food court at regular meal times. The wait for most food stalls is an hour long. Eating off-peak or in the stadiums usually saves you time in line. One of my favorite meals is the shrimp and lobster salad, which is found in the Grandstand. Not too expensive, around $20, considering a taco is $10.

You can bring food to the US Open, which is a great way to save time and money. You cannot bring glass containers, coolers, or backpacks, but can bring in a reusable water bottle (of 24 ounces or less, like my favorites)  or unopened bottled water.

You can bring a bag into the open, but it needs to be less than 12”W x 12”H x 16”L. 5. I bring in my Baggalini Backpack as it passes the size test, but is big enough to fit what I need, including the side pocket for my Contigo water bottle, and is easy to carry.

Where Can I Buy Tickets?

If you are a United States Tennis Association member (the nonprofit that sponsors and runs the tournament and local league play), you can buy tickets early and get a deal.

Otherwise, check out US Open’s ticket site to buy your tickets. If you are traveling to the game, these tickets do not go on sale until the summer. So you may want to purchase tickets through a third party to ensure you have tickets before planning your trip.

Can I Take my Kid to the US Open?

Read on for a whole article I wrote about attending the US Open with Kids.

I traveled all the way for the US Open; what else should I do?

The US Open is a great excuse to visit all of New York City. I routinely stay over in Manhattan when I go to the US Open and spend some time enjoying this cosmopolitan city with its great museums, sites, and food. Check out my New York City Guide for more ideas on ways to spend time! I usually stay near Grand Central Station since I can leave my bag there and then get it before I catch a train home. I stay at the Roosevelt Hotel, RIU Times Square, or the Radisson Martinique on Broadway.

For more information, visit the US Open official site, and I hope to see you at this year’s games! Have you been to a tennis Grand Slam? Any great memories?

P.S. You can also check out my other articles about the US Open for more information and stories, including Bringing a Kid to the US Open.

12 thoughts on “Everything You Need to Know to Plan Your Trip to the Tennis US Open!”