The Big E or the Eastern States Exposition is New England’s regional fair. It is not only a state fair, but a six state fair! It is an adventure that my family drives two hours to explore every mid-September to the beginning of October.

The Big E has a large parade that occurs in the afternoon down its main thoroughfare. There are cars, bands,  animals  and lots of people, but our highlight is catching the beads being thrown from the Mardi Gras floats.

You can shop for absolutely anything at the fair- family pictures, clothes, home wares, drones, Segways, airbrushed hats, furniture or casts of your families’ hands. My kids spent the most time at the Mad Science booth where there were lots of science experiments to buy and take part in.

Like any good fair, the Big E has a complete midway with tons of games and rides. We mainly skipped these this year, as they were really expensive. Rides were between 5-10$ a piece and most of the games were around 4$.

Like at Connors FarmConnors Farm, one of my family’s highlights was definitely seeing the pig races. There were more of them here and there was even a baby pig that swam between races. 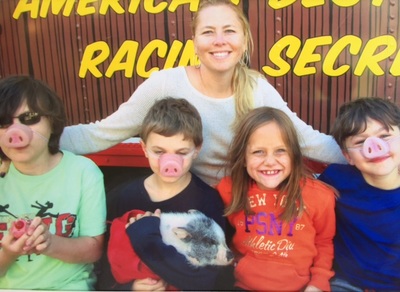 Not only does the Big E have normal farm animals, but also exotic animals. There is a petting zoo with camels, alpacas,  goats and a kangaroo. Also, there are tents that you can pay to enter that advertise the world’s largest horse, others with a variety of bears. My favorite place to spend time at the Eastern States Exposition is roaming through the area known as the Avenue of the States. In this area are replicas of the New England states’ original state houses which contain shops and food unique to each state. If you are visiting New England and can’t visit each state in real life, it will give you a flavor of the states. A few examples…the Rhode Island house has Del’s lemonade and hot wieners, the Maine house has blueberries, Whoopie Pies and loaded baked potatoes, Vermont has cheese, Ben and Jerry’s ice cream and maple everything, Massachusetts has seafood and white and red raspberries, New Hampshire has apple pie and apple cider. Imagine eating your way happily through these houses! There is also every kind of carnival food that you could imagine eating at the Big E. We tried a camel burger (like fishy beef, we weren’t fans), a Cajun alligator burger that was quite good, a yummy rattlesnake sausage. The kids and I also ate tons of normal fair food; funnel cakes, cotton candy, corn dogs and chili fries.  What is the weirdest food you have tried and what is your favorite fair food?

Read on for our favorite New England fall activities. 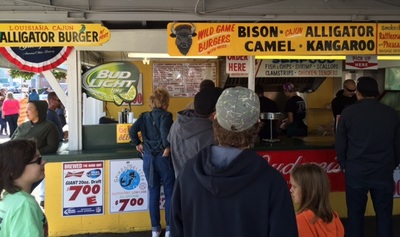