Although I have always enjoyed a good bike ride, I have only recently really appreciated how nice they are. It started with a bike tour in Portland, Maine, one of the highlights of my trip there last spring. I realized that with the right bike, even a ten-mile ride is accessible to most people and a great way to be present in nature. Fast forward to this year and the Corona-virus quarantine. With my normal daily tennis not allowed and many hiking trails closed, I started to explore all the bike trails in Rhode Island. I had no idea Rhode Island has so many lovely paved bike trails going through various natural habitats. So, I am going to share some of my favorite Rhode Island bike paths with you. Enjoy your time exploring them. Easy, although it is moderately long, It is a fairly flat trail. If you only ride into Peacedale, the path is all off-road.

The northern portion of the trail goes through forests and swamps. We saw a huge beaver dam and many birds. If you go all the way to the end you can walk around the Indian Run Reservoir. The South County Bike Trail is a great place to do some birding. Around the swamps, we saw this fluffy Eastern Towhee.

Things To Eat Along and Around the Bike Trail

Just a few blocks away from the Kingston Station is TLC Coffee Roasters. Grab a coffee and sandwich here before starting your ride. When you reach Peacedale, grab a BLT of salted rosemary bread and a peanut butter bar at Sweet Cakes Bakery and Cafe.

Take a Ride on the South County Bike Path if You Want:

An easy trail among nature.

This 19-mile path is divided into many paths named for the towns they go through, including Trestle Trail, Coventry Greenway, West Warwick Greenway, Warwick Bike Path, and Cranston Bike Path. At this time, I have ridden the Coventry Greenway Bike Path, so I will talk to you about that one. At points, the trail is shared with horses. There are also options to mountain bike on the horse trails.

This is a moderately difficult ride compared to many in the state, particularly near the end of the trail when things get a little hilly.

The trail travels through tall trees, over many bridges and past lakes and ponds.

Take a Ride on the Coventry Bike Path if You Want:

A moderately difficult ride through the forests of western Rhode Island. The northern portion of the trail becomes urban with long stretches of street riding.

This path follows the Blackstone River and includes some on-street portions. It starts at India Point Park in Providence, travels through Woonsocket and Cumberland to the Massachusetts border.

Where to Pick up the Blackstone River Bikeway:

Much of this bike path is interrupted by street routes, which are hard to follow. The most beautiful continuous stretches are in the middle of the trail. Although there are many spots that you can pick up the path, I would recommend picking it up at The Rivers Edge Parking Area at 195 Davison Avenue, Woonsocket, or Blackstone River State Park in Lincoln. In these areas, you will find the most extended continuous stretches of paved trail, about 8 miles. Since this trail follows the Blackstone River, it has many water features, such as waterfalls, old mills, dams, and bridges.

Things to Do Near the Blackstone River Bike Path:

Gotta Q BBQ is the best barbecue I have had in the state. It is within a ten-minute drive from the Blackstone River State Park Lot.

Take a Ride on the Blackstone River Bike Path if You Want:

A moderate ride with sublime views along a river, but are okay with a bumpy trail. This short all off-road paved bike path is a great trail to start with. It begins at Quonset Business Park (where Dave’s and Kohl’s parking lot) and ends at the Calf Pasture Point Beach

The first half of the path travels through residential North Kingstown, with trees on one side. It goes by the museum of the Seabees. Once you reach the parking lot for Calf Pasture Point, the trail becomes more beautiful, going by pastures and bay views. The trail ends at the beach, where you can then pick up hiking trails along the water.

Ride the Quonset Bike Path if You Want:

A moderate ride ending with a hike on the beach. Despite its name, this bike path is 3-miles long. Ten miles refers to the name of the river running alongside the greenway and nature preserve it is in. It is one of the few bike paths in the state that was not built along an old railroad route. The whole course is along the water. It travels through Pawtucket and East Providence

This 3-mile bike path follows the hills along the James Turner Reservoir.

A calm rolling river and a large reservoir swarming with swans Where to Park to Bike the Ten Mile River Bike Trail:

Ride the Ten Mile River Bike Trail if You Want:

A short, hilly ride alongside a creek without having to deal with the urbane. 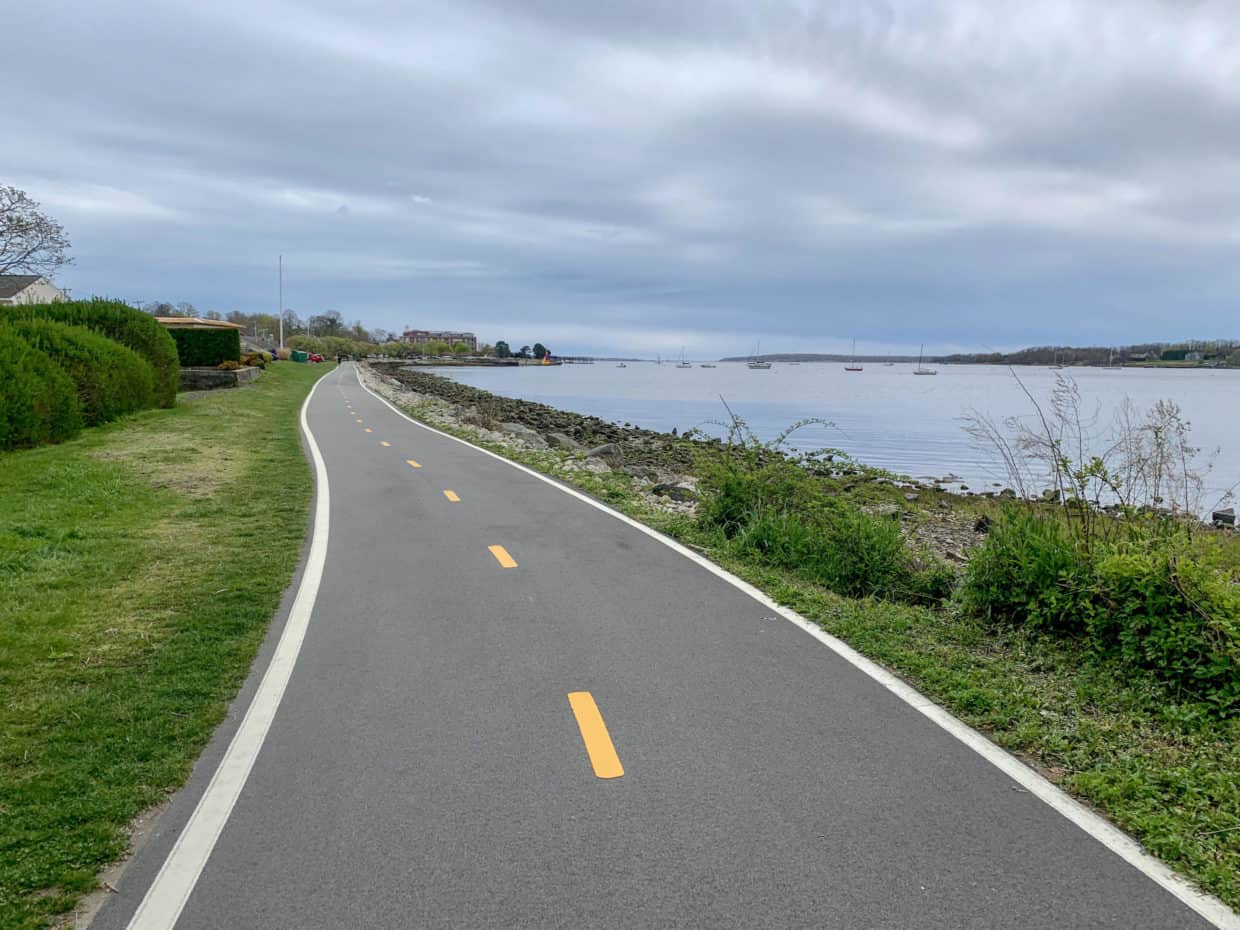 The southern portion of the East Bay Bike Path.

This beautiful bike path starts in India Point Park in Providence and ends in Independence Park in Bristol. It was the first of Rhode Island’s bike paths and is mainly flat, except for a hill in East Providence. At the moment, the bridges in the middle of the path are closed so that you will be rerouted over the auto bridges. This is actually a great way to divide the ride into two portions for different days. Things to Do Along the East Bay Bike Path:

Colt State Park is right near the southern terminus of the path. There is a Del’s Lemonade store along the path in Warren that only takes cash. My favorite diversion from the path is the Audobon Trail on the Warren-Bristol line. If you time your visit right, stop for Mission Burrito in Riverside for lunch or dinner. It is close to the middle of the path.

Where to Park to Pick Up the East Bay Bike Path:

To access the southern portion of the path, park at Independence Park in Bristol. For the northern part, you can park at India Point Park in Providence. From India Point Park it is a pretty ride over the Washington Bridge, but then you will have to deal with some major hills and drive through some city streets. Another alternative is to park about a mile onto the path. There are a few lots on Veteran’s Memorial Parkway in East Providence. Oceanside grasslands, Audoban hiking trails, continuous views of the Narragansett Bay, a lighthouse and the quaint villages of Warren and Bristol

Take a Ride on the East Bay Bike Path if You Want:

A charming ride along the water and through historic villages with many birding opportunities. This one-mile bike path can be accessed at the end of the East Bay Bike Path.  Many of Rhode Island’s bike trails travel along abandoned railroad tracks. This trail follows the Warren-Fall River Railroad spur.

What Kind of Bike Should You Buy for Rhode Island’s Trails?

I don’t claim to be a bike expert, but love our bikes and am happy to share what I have learned with my readers. There are some Amazon links here, so if you buy anything through them, I will make a commission. Me enjoying my ride on the Ten Mile River Trail.

When I started riding bikes, I was only in it for comfort. I was riding a Huffy Beach Cruiser, which is very comfortable and inexpensive, but not a great bike for tackling any hills. Lagging behind my kid had to stop!

So, I headed to Providence Bicycles in Warwick where I bought a Suede Liv bike, which you can see in the picture above.

When I am riding, I need to have some stuff with me. I love having a basket to carry my camera to take pictures of birds (my new COVID obsession).
There are many great options on Amazon to fit your style.

If you need more room, consider a large basket for the back of your bike.

I also got a drink holder to go on my handlebars. I prefer this, as my water is easily accessible. It also helps keep my water cold and it fits my Contigo water bottle.

My son wants the option to use his bike to go mountain biking, as well as ride on paths, so he bought a Giant Talon. If you can’t get to a bike store, you can check out some bikes like the Raleigh Bikes Talus.

Mountain Bikers don’t want stuff hanging off his bike, so he got an inline water bottle holder and a small cell phone holder that mounts on his handlebars and can hold an inhaler and bug spray.

Other than a bike, the thing you have to have is a good bike helmet.  I had one from before, but next on my list is to buy one that matches my bike to complete my bike that fits my personality perfectly.

I will keep adding information to the post as I explore more trails. Watch my Instagram or Facebook to see which trails I am exploring today.

Let me know what you think of the trails or if you know of any I have missed. To get more exercise in Rhode Island, check out my list of Best Walks in Rhode Island. Get into nature and enjoy biking on Rhode Island’s system of bike paths. Read on to find the best one for you or your family. #getoutside #visitNewEngland #bicycling #RI